At its latest meeting on September 9-10, the ECB Governing Council took no monetary policy actions (1), despite the surprise drop in eurozone inflation in August (2) and the rise in the euro’s exchange rate (3). The Governing Council did update its forward guidance, by changing the introductory statement to the press conference by Christine Lagarde, the ECB President (4).

The Governing Council has tightened its forward guidance, and it seems relatively confident that the economy is on the path to recovery from the worst of the Covid-19 pandemic. Philip Lane, the ECB Chief Economist (5), takes a more nuanced view in a blog post as he focuses on uncertainty and the seriousness or the severe scenario of the ECB staff projections (6).

In this note, first we interpret the changes in the language of the Governing Council’s statement; we do this with the help of Christine Lagarde’s responses at her press conference; then we compare this to the subsequent blog post by Philip Lane on the updated macroeconomic projections by ECB staff.

How the forward guidance changed

There is one subtle change in the description of the monetary policy decisions (1), relative to that given the ECB’s previous monetary policy actions in July (7). This relates to the path of inflation as a justification for the Pandemic Emergency Purchase Programme. The relevant part is shown in Table 1, with emphasis added to highlight the changes.

One possible interpretation of this change is as follows. Before the August inflation data, the ECB could argue that the pandemic represented a single shock to inflation, which manifested itself in a parallel shift of the projected path of inflation. The events of the Summer, namely the rise in the euro’s exchange rate at the end of July and the drop in eurozone inflation in August, represent a second shock to the inflation outlook, which is no longer simply a shifted version of the pre-crisis projection.

The other change in the introductory statement delivered by Christine Lagarde can be more properly described as affecting the Governing Council’s forward guidance. It is in table 2, again with added emphasis.

Gone are the following references:

Let us now look at the explanations of the inflation and exchange-rate outlook given by Christine Lagarde at her press conference and by Philip Lane in his recent blog post.

Why no reaction to dropping inflation

Christine Lagarde said that the August drop in eurozone core inflation to 0.4% was as expected (4). This is an exaggeration. Perhaps it was expected that inflation would drop, but the size of the drop caught everyone by surprise. HICP inflation excluding energy, food, alcohol and tobacco dropped from 1.2% in July to 0.4% in August (2).

Christine Lagarde attributed the drop in core inflation partly to the German cut in VAT, and partly to the postponement of garment sales from July to August in two of the major eurozone countries.

As the German VAT cut is a temporary measure due to expire at the end of the year, the ECB does not consider it a factor affecting the medium-term inflation outlook. However, the drop in German inflation because of the VAT change was already seen in July, when Eurostat’s estimate of core HICP inflation for Germany was 0.7%, down from 1.1% in June. It seems unlikely that the German VAT change caused monthly drops for two consecutive months. In his ECB blog post, Philip Lane explained that the German VAT cut is expected to keep headline eurozone inflation negative for the rest of the year (5). The expiration of the VAT cut will then cause a mechanical rise in inflation at the start of 2021.

The biggest drops in both core HICP inflation, according to Eurostat data, were seen in Belgium (from 3.1% in July to 0.7% in August) and in Italy (from 2.0% to 0.3%). The Netherlands posted a similar drop to Italy, and France saw a 0.8% monthly drop in the core inflation rate. An explanation of the core inflation drop limited to just two of the major countries seems too limited.

At her press conference (4), Christine Lagarde noted the Next Generation EU recovery fund will have an effect that is not included in the staff macroeconomic projections just published (6). Philip Lane explains this is due to the spending plans not being finalised, as well as them extending well beyond the two-year horizon of the ECB projections. We have previously estimated that in 2021 no more than 10% of the Next Generation EU fund, or €75bn, need be spent (9).

How serious is the exchange rate pressure?

The euro’s exchange rate relative to the US dollar has risen by about 10% since May, but perhaps a more appropriate measure of the exchange rate pressure on inflation would come from the trade-weighted exchange rate of the euro calculated by the ECB. This rose by about 2% at the end of May, presumably as a positive market reaction to the political agreement between Germany and France on the EU recovery fund. Then, at the end of July, it rose by another 2% when the European Council agreed on the same. Figure 1, an interactive chart from the ECB, shows the euro’s nominal effective exchange rate over the past year (3). 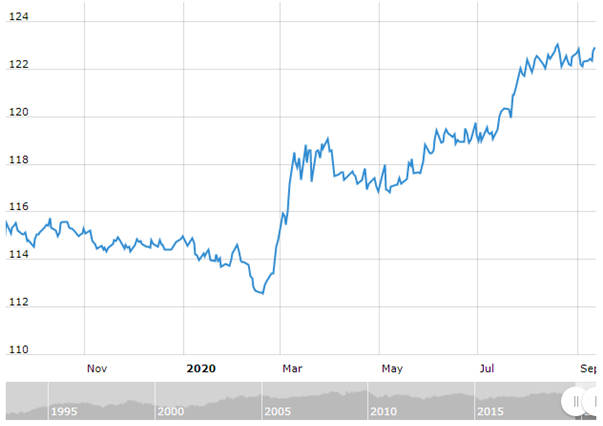 A recent article by the ECB notes that evidence suggests a 1% change in the euro exchange rate leads to a 0.3% change in import prices within a year, and a 0.04% change in inflation over the same period (10). Based on the Euro’s 4% appreciation in trade-weighted terms, one could expect a 0.2% downward pressure on eurozone prices over the next year.

What to expect in the coming months

Philip Lane conveyed a stronger sense of urgency by saying there is no room for complacency (5). This is because uncertainty over the course of the Covid-19 pandemic remains high, and the ECB staff macroeconomic projections still have GDP 5% below the 2019 at the end of 2022 in the severe scenario (6).

The ECB Chief Economist also argues that the recalibration of the PEPP in June has fostered more favourable financial conditions and helped keep the expected path of inflation higher than it would otherwise be. The Governing Council decided to expand the maximum amount of PEPP bond purchases by €600bn to €1.35tn, and to extend until mid-2021 the duration of the programme (11). This would be a testament to the power of expectation, since in fact the ECB has bought a declining amount of bonds in July and August than in the Spring months (12), as shown in figure 2. This is possible a consequence of a seasonal lull in the bond market, however.

In conclusion, the message conveyed by Philip Lane based on the ECB staff projections is much more nuanced than that of the Governing Council’s statement and Christine Lagarde’s press conference. The baseline scenario of the ECB justified no policy action this month. However, in view of the uncertainty and the seriousness of the ECB staff’s severe scenario, the Governing Council was perhaps too quick to tone down its forward guidance relative to the health crisis and its willingness to do whatever it takes. Direct action on the exchange rate is very unlikely, though if the euro continues to appreciate in trade-weighted terms it may also force the ECB to loosen policy.